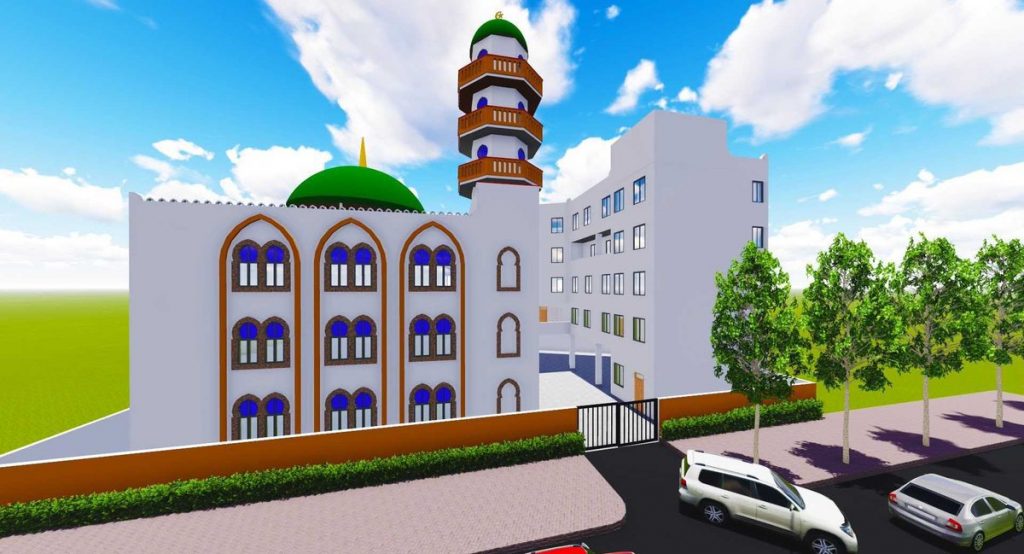 The old mosque, Masjid Salaam, situated in a prime area of Dar es Salaam city was inaugurated in 1957. From its original capacity of approximately 200 worshippers, comprising predominantly of two generations of Asian-descent Ahmadi settlers, the Jamaat has seen a multi-fold increase in its members who by the Grace of Allah now include a large indigenous community of African Tanzanians. Hence a need for a major increase in the capacity by building a new mosque has been on the agenda for almost a decade. The alternative option of upgrading the old mosque was considered but it needed substantial repairs and complete modernization in keeping with the rapidly developing Mnazi Mmoja area where it is situated. Restricted space limitations and significant remedial works proved this option not cost effective.

In 2011, Ameer Jamaat Tanzania initiated an ambitious drive to replace the Dar es Salaam mosque. Following a meeting with Hazoor-e-Anwar in UK, the rebuilding project was given approval to proceed. Conceptual design of optimizing the available plot and building new structures was conceived by the Jamaat Architect Abdul Razzak Shaikh in London in 2013 working under the patronage of the IAAAE – European Chapter. The design brief included: 1. Demolish the existing mosque completely and replace it with a new 3-storey mosque having a capacity of approximately 900 men and women worshippers. 2. Build a new 5-storey Mission House in the same plot which will provide car park space at ground floor, elevated living accommodation on three floors and a book storage area on the fourth floor. 3. The existing two-storey Admin Building is to remain. 4. Provide utilities for the new buildings which will include underground water storage tanks, water supply lines, sewage discharge and underground electrical power cables and a standby generator. 5. All new structures shall be of reinforced concrete frames with concrete infill block walls. 6. The total Plot size is approximately 1150 square meters       (0.115 ha).

Once a broad design concept was established in London, the project was awarded to a group of Dar es Salaam based firms of architects, engineers and quantity surveyor in 2014 to prepare a detailed design package and manage the tender preparations and selection of a local construction company. The IAAAE European Chapter played an active role during the design development by sending their Architect while keeping a close eye on the project budget. Tenders from four construction companies were invited during the fourth quarter of 2015. The construction contract was awarded to an established Dar es Salaam company Dezo Civil Contracts in the first quarter of 2016. Construction started in April 2016.

A budget of $1.7m was approved by Jamaat which included the costs of Construction, local Engineering Consultancy and expenditures requiring miscellaneous Local Authority fees

Support our projects by making a contribution

Want to hear about our projects?

IAAAE is always working to expand the team. We are

Over the Bank Holiday Weekend, IAAAE had the pleas